To animate the characters eyes a pin will be inserted into a hole in the pupil﻿ to help roll the eye in its socket. This gives good control for subtle eye adjustments. In this post I'll be showing the process of finishing the eyes.
﻿ 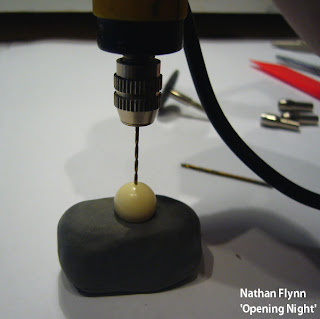 The first stage was to drill a small hole into the polyurethane eye balls I made earlier. I used the smallest drill bit I have, which is about the same diameter as a pin. I secured the ball into some Plasticine to hold it steady and drilled half way through. 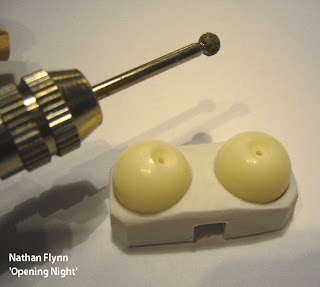 Next I made some concave circles to act as irises. I used a small spherical grinding piece and my rotary tool. 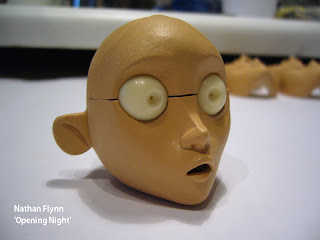 In the picture above you can see the concave irises a little clearer. 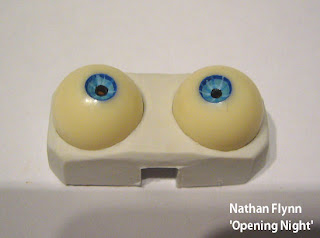 Finally I painted in the blue eye colours using a very fine brush. I started with a dark blue and then painted a lighter blue centre, leaving a ring of dark around the edge. Next I added some different shades of blue branching out from the centre and black for the pupil. After the paint had dried I added some gloss to catch the light.
These next pictures were taken before I did the eyes but I thought I'd post them just to show the puppet with the painted head. This I still a work in progress. 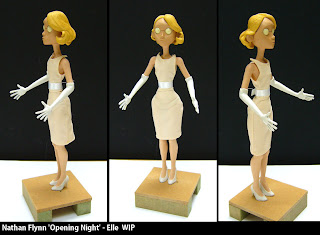 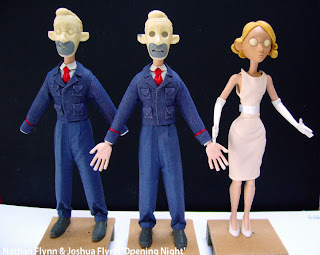 Above are the Mail Man Puppets next to Elle to show their scale in comparison to each other.
In my next post I'll show how I've painted Elle's faces and hair and added some finishing details.
Thanks for looking.
Posted by Nathan Flynn at 1:54 am